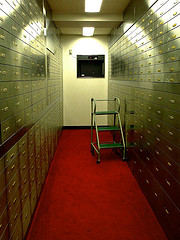 Sure, the best way to make money is to Â work in a money industry, but given the current economic situation and the fact that banks everywhere are going “broke”, is creating an iBank really all that smart? Â I love the thought of revolutionizing the banking system, and I’m sure everyone can get behind overthrowing theÂ archaicÂ concepts of charging people to get at their own money, but Apple isn’t stupid, and they are very skeptical as company on a whole about getting into new “markets”. Â I mean, they do not plan on getting into the netbook market, or the “cheap” phone market, does anyone really believe they would risk everything and jump on the banking bandwagon? Apple has a history of only doing things they can be the absolute best at. They don’t take second very well, and they certainly don’t risk their future on emerging markets. Â They wait for them to be stable and full of growth. The banking system is neither, and anyone who suggests that a move into the banking industry is a smart move, doesn’t see that it not only runs counter to thoseÂ aforementionedÂ ideologies, but also can’t see that it’s flat out retarded. Â Someone needs to lay off the crack pipe. Â Just because they changed their corporate identity to Apple Inc recently doesn’t mean they’re looking into dominating the financial industry.