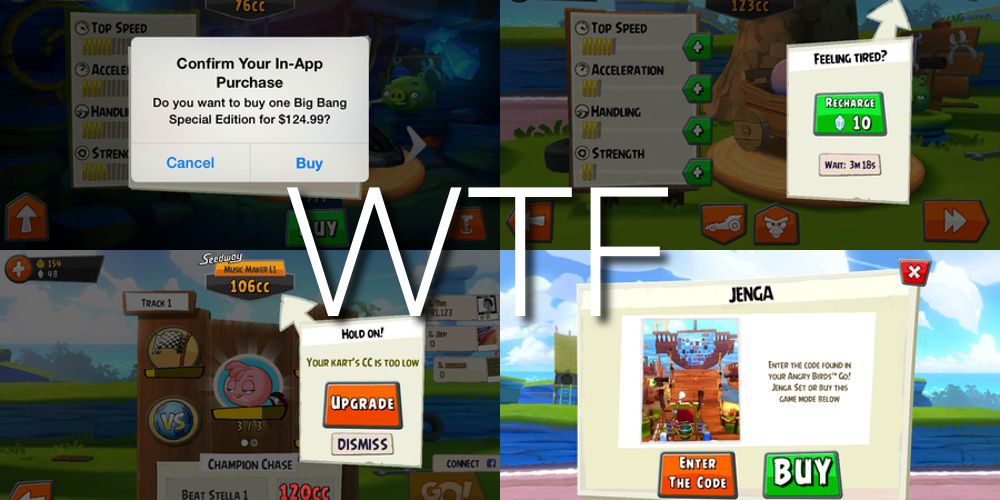 Only three kinds of people would spend a Benjamin on a virtual car in an iOS game: Kids, Addicts, or Idiots. It probably comes as no surprise that Rovio is continuing its whoring ways with Angry Birds Go. This time though it’s not tee-shirts, or Angry Birds flavored condoms. Nope, this time it’s a $100.00 in-app purchase for go-karts in a game clearly aimed at tweens.

PocketGamer managed to get its hands on the game before the rest of the western world:

The cartoon racer just went live in New Zealand, as part of an iOS soft launch. We went to check it out and found a game that has been given the full – and we mean full – free-to-play package.

It’s got $100 cars and energy systems and pay-for power-ups and multiple currencies and advertising. It’s really quite impressive, to be honest.

This has to stop. If in-app purchases are here to stay, and they probably are, there should be regulations in place to stop what, from here anyway, looks like predatory behavior aimed at taking advantage of people. Personally, I think IAPs are predatory and have no place in the industry. It’s pretty disgusting that a company who puts a lot of effort into marketing its products to kids thinks that IAPs of this kind are an appropriate revenue stream.