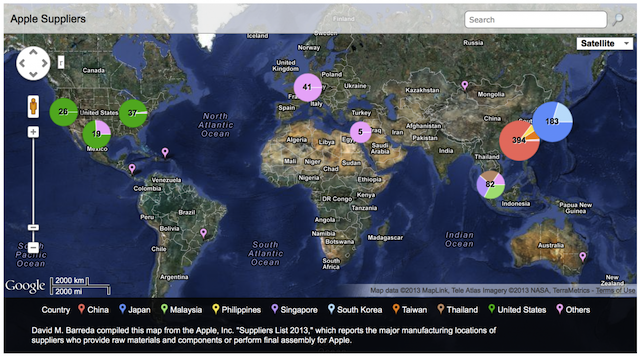 A map put together by China File highlights all of Apple’s publicly available suppliers that sustain Apple’s production lines with components. David M. Barreda composed this map from Apple’s “Suppliers List 2013,” which outlines the major manufacturing locations of Apple suppliers. These suppliers provide raw material and components or perform final assembly for Apple.

As you can see, the majority of Apple’s suppliers are found in Asia, with countries that include China (of course), Japan, Malaysia, the Philippines, Singapore, South Korea, Taiwan, and Thailand, among others. It’s also interesting to see where else in the world Apple sources its components, all of which are available on the interactive map.

Each point on the map shows an individual supplier, with a complete list of found below the map itself, which includes company names, addresses, and city/country locations.