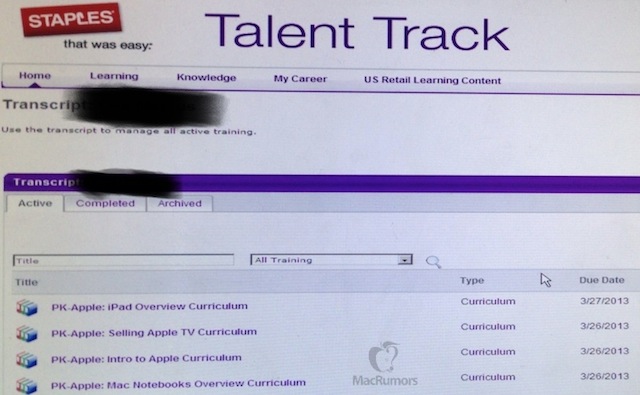 Staples will start to sell iPhone 5s, MacBooks, iPads and Apple TVs by the end of March, according to information leaked from a Staples employee training document. The leaked documents suggest that Apple products will start to be sold in Staples stores in two weeks as employees are supposed to finish training for the iPhone and other products by the 26th and 27th of this month. We’re expecting to see the products on Staples’ shelves shortly after employee training is done and dusted.

From the iPhone 5 curriculum training document:

At the end of this curriculum, associates will be able to describe key features of the Apple iPhone 5, and suggest attachments that compliment the iPhone 5.

This isn’t the first time we’ve heard of Staples selling Apple products. Two months ago, the company reportedly began gearing up for the launch of Apple products in its stores. This report was later confirmed by Staples employees. Then, late last month, the company began selling Apple accessories through its online store in the United States. These accessories include display adapters for the iPad among other accessories.

Staples is one of the largest business supply companies in the United States with over 1,500 retail stores. Until recently, the company hasn’t offered Apple products, but has offered devices from competitors like Blackberry, Amazon and HP; because of this, Apple products appearing at Staples retail stores will be a big expansion for Apple’s distribution chain. This partnership will also allow companies that have billing plans with Staples to more conveniently purchase Apple devices.