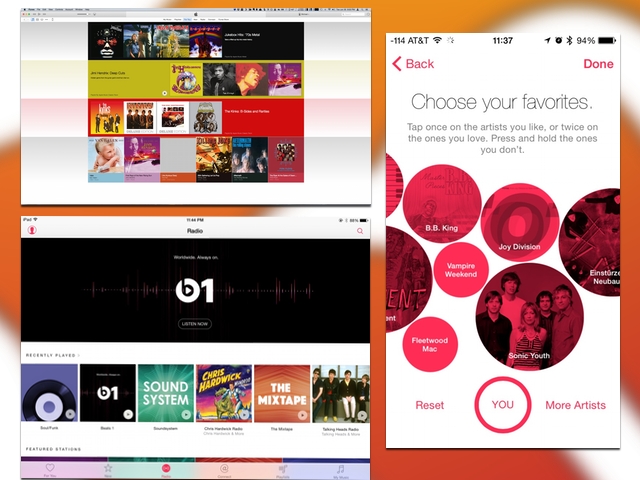 It feels like talking about Apple Music as anything other than a cultural force is silly. Everyone is reacting to Beats 1, Connect, and at the same time trying to suss out Apple Music itself as a competitor to Spotify. On the other hand it’s an app like any other, so I put it through the paces. It pushed back everything else I’ve written about this week. (Normal Apps and games will be posted later today.)

To be fair, Apple could have slapped a silver logo at the top of Beats’ original service and gotten enough interest to battle Spotify in earnest. That isn’t what they’ve done here. This is Beats reflected through the lens of Apple, polishing some rough edges while amplifying others.

The experience in setting up Apple Music replicates Beats entirely. You pick genres and bands you like until you have a mix. The UI is these floating bubbles. If you’re not a picky listener, or just like a wide range of mainstream music, this serves you well. I was able to play around and hit “more bands” until I got something I like. Not everyone is going to be that patient. I had a similar complain with Beats, when the choice is manufactured by record companies, it favors tight genre boxes.

The set up process creates the For You page that Apple is hoping to be the hub of your discovery. This has playlists created by Apple curators with influences, deep cuts, and genre mixes. If you’ve been using Beats this is nothing new. Apple’s done a bit to lighten the tone of the service, and make it seem a bit more record store and a lot less marketing meeting. You can “love” tracks as you play or browse, which replaces the ratings in iTunes. (That might annoy some people, but I was never a huge fan of the star system.)

Radio has gotten the biggest share of Apple Music’s press. Gone are the Pandora like stations you used to make in iTunes. Now you can either choose one of Apple’s new marquee stations, or a specific genre station. You can still make artist -based stations, but they’re limited to a single artist. I’ve heard that this is because these are human curated as well, but I wasn’t able to verify this. The genre stations get credit for their programming. Even iTunes music had huge problems with repetitive playlists, and I haven’t run into that with the new radio. I really like the genre stations, but there isn’t a great way to get a good variety of different genres mixed together. (So what, if I want to listen to 90’s ska, 80’s rap, and 70’s soul at the same time?)

The marquee stations are interesting, but you will need to experiment with them. None of them have anything but a name. Mixtape was mostly 80’s music with some 90’s Alternative mixed in. NPR and ESPN are included for talk radio fans. Beats 1 is the star of the show though. It has a huge variety of music, depending on the curating DJ. Apple has essentially created a celebrity run college radio station. It’s not my thing, but my music tastes are a bit out of left field. (I did like Josh Homme’s set.)

The streaming service is passable. I didn’t run into much I couldn’t find, and the service already has its exclusives. The bigger problems I had was getting the iCloud music portion to work. Playlists created on my phone wouldn’t show up on my iPad or Mac, and even when I added music to them they didn’t stay. Much of my library isn’t even getting scanned by iCloud music. When you add Apple Music to your library, there seems to be issues with the way that albums complete. Adding two albums from an artist with the same songs causes your library to remove that song from the original album. Hopefully these are just growing pains, but that doesn’t make them any less frustrating. It does mean that you may want to hold on to that iTunes match subscription.)

Getting Family Sharing working was a huge pain, and I am not even sure that I set it up correctly. Even once I got the stupid accounts set up right, Apple Music didn’t seem to agree. This process needs to be made simple. There’s nothing exclusive about these frustrations to Apple Music, but it reminded me why I didn’t bother with the feature before.

One feature Apple inexplicably got wrong was sharing. Much of Spotify’s dominance comes from the easy of creating playlists and sharing them out to social networks, or even embedding them on web pages. I don’t expect Apple to match all of this, but even sharing single songs to Twitter and Facebook are weird. The tracks are shared as pictures with often low-res artwork and links that don’t even take you to a listen page. Instead it takes you to the buy page, meaning you have to root around a bit to listen to the track. on iOS there seems to be some automation that moves you to the right place, but that doesn’t work as well on the Mac or Windows. Connect has a great look to sharing, and they need to replicate that in the date they’re exporting.

Connect is a bit useless. During this hype period it is a good way to see bonus tracks from Trent Reznor and other artists inside Apple’s camp. I’ve pretty much ignored, and you probably will too.

I am not giving Apple Music a thumbs down, there’s enough to like here to like that it’s worth keeping up with the service. I’m keeping Spotify for now, and will make my decision to see where I am at the end of the three month trial. It’s hard not to think that Apple Music would have been better off had it not been built into iTunes and Music. The frustrations with the app are the same that many people have had with everything else with iTunes. There’s problems with complexity, and consistency through out the UI.

BI?: If you’re still in the market for a streaming service, definitely get Apple Music. It’s the most seamless for iOS and Mac users. If you’re a Spotify user, still take the trial as you might find you like some of these features better. There’s no link to share, just update you Mac or iOS device and give it a try.