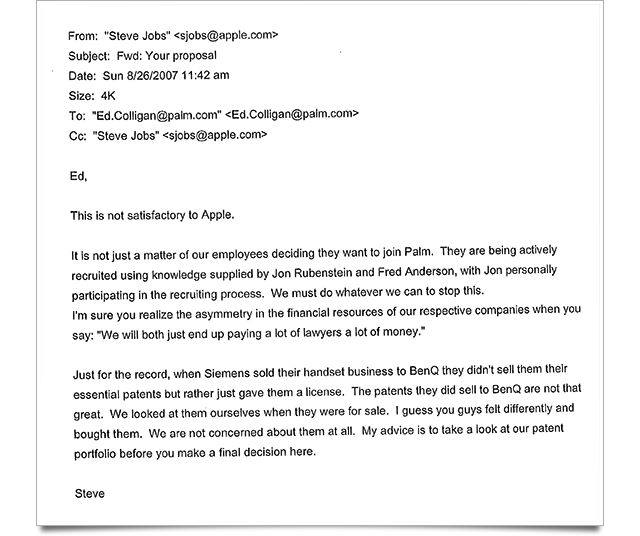 Last week it was reported that Apple CEO Tim Cook was ordered to be questioned for four hours in a lawsuit against Apple, Google, Intel, and other companies by five former employees in an anti-poaching case. Now a court filing has just been made public that reveals former Apple CEO Steve Jobs threatening former Palm CEO Ed Colligan with a litigation to stop him from hiring Apple employees.

The defending tech companies wanted to keep a range of documents private, but U.S. District Judge Lucy Koh rejected parts of that request, which led to details of Jobs’ 2007 communications with Colligan becoming part of the public record.

In his statement, Colligan said that Jobs suggested eliminating competition between the two companies for talent and “Mr. Jobs also suggested that if Palm did not agree to such an arrangement, Palm could face lawsuits alleging infringement of Apple’s many patents.”

Colligan responded that any such agreement would probably be illegal and that Palm also had patents that it could use to countersue.

Google was also pretty involved in these no-hire practices. The court filings also detailed how Google developed its own no-hire agreements. In an email written by then-chief executive Eric Schmidt, he stated: “I would prefer that Omid do it verbally since I don’t want to create a paper trail over which we can be sued later? Not sure about this.. thanks Eric.”

You can see below some of the condemning documents that have been made public: