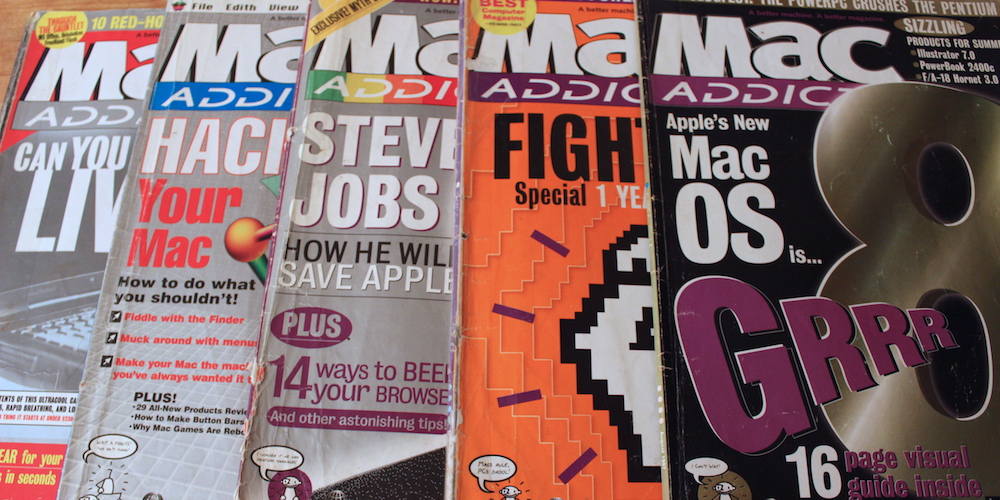 I’ve been a Mac user since I was about eight years old. My older sister was a sophomore in college (my siblings and I span the generations), and she needed something other than my family’s trusty Smith Corona typewriter to write her papers, so she bought herself a used Mac Plus that served as our de facto family computer.

Although that Mini Mac piqued my interest in tech, it wasn’t until I got a look at the initial issues of MacAddict magazine in late 1996 that my interest turned into a full-fledged obsession. MacAddict was colorful. It was fun. It was irreverent. It spoke to me in a way that other, more established tech publications didn’t. And to a teenage Mac fan like me, it was more or less the best thing ever.

It all started with the covers, really. Let’s take a look at a June 1998 cover of MacAddict, as compared to the same month’s issue of Macworld: At that time, before countless tech blogs like Macgasm cropped up, Macworld was the undisputed king of Apple journalism. It was there pretty much from the birth of the Mac, and by 1998, Macworld was an established, mature, well-respected brand. MacAddict, by comparison, was a young, brash, unapologetically enthusiastic, wise-cracking upstart. You can probably guess which one would’ve appealed more to a 15-year-old Mac geek.

(Ten years later, of course, I took a job with Macworld’s sister publication, PCWorld; these days, I am an occasional freelance contributor to Macworld.com, and am good friends with members of the Macworld staff.)

But the cover wasn’t the only thing that set the tone. A fun, relaxed, conversational tone permeated every issue. And MacAddict fully embraced the unbridled enthusiasm/obsession that Mac users showed toward their computers. I mean, what other tech magazine could possibly run a cover encouraging readers to “fight back” for their computing platform? MacAddict totally fit the mood of what it was like to be a Mac user in the mid-to-late 1990s, when Apple was flailing and rapidly losing relevance—and money. But eventually, the “Addict” theme ran out of steam as Apple recovered from its brush with death and began to see more mainstream acceptance. And in late 2006, MacAddict announced that it was changing its name to MacLife and tweaking its focus, beginning with the February 2007 issue. It was the end of an era in tech publishing.

But even though time marches on, MacAddict’s DNA lives on in those who worked on it—and those of us who read it and dreamed of writing about tech one day. I’ve been fortunate enough to have worked with a few former MacAddict and MacLife employees, and I’d go so far as to say that I wouldn’t be working in tech media today if I hadn’t discovered MacAddict.

So here’s to you, MacAddict. Thanks for inspiring this writer—and continuing to do so, even today.

Mac From The Past is an ongoing series in which we take a look back and indulge in a little Apple nostalgia. Got a favorite Apple memory to share? Tweet us @macgasm.