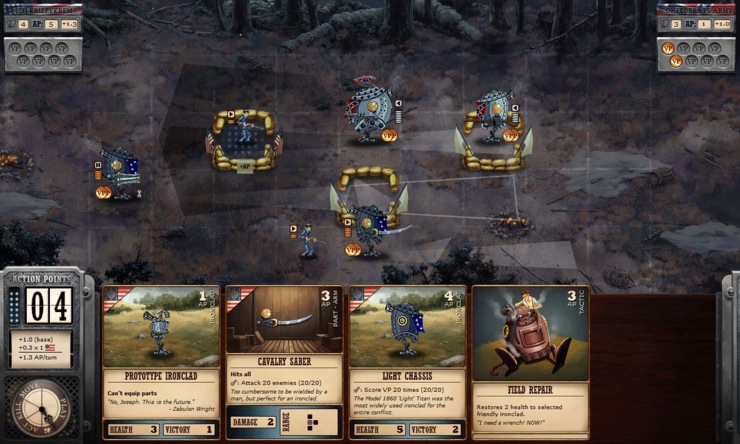 Ironclad Tactics is going to be a divisive title. Either you’re going to like a game that combines the Civil War, Steampunk, Strategy, and a card game, or it’s just going to seem like a frustrating mess. The game has a pretty steep learning curve. You get three levels to get your hang of the basic mechanics, but after that you are on your own. Once you’re actually in the main campaign of the game, it doesn’t pull punches. Though you can replay earlier levels to boost your cards and stats.

It’s hard to explain exactly what the appeal of this game is, other than it’s strange mix of play styles. It has online multiplayer, which should be tried, as it will give you an idea of some different tactics you can try. Deck Building is an additional strategy you need to master the game, but unfortunately you aren’t given much guidance. You have to figure out how to put together twenty cards, and balance tactics, different unit types, and weapons.

What’s Good: There is a lot of depth to this game. Civil War and Steampunk alternative history is an interesting twist.

What Sucks: Game is really complex and has a large difficulty curve. Could use some more guidance on deck building.

Buy it?: If this sounds like the sort of game you’re willing to check out, it’s currently $14.99 on Steam.