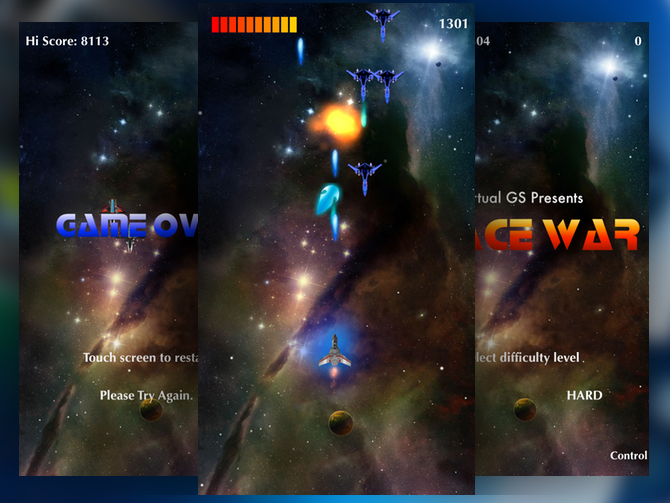 If you’re going to name your game after the first video game, you better deliver something. Space War HD does deliver in some ways, but in others it’s missing a lot of polish. The game is meant to emulate classic arcade shooters, but its concept is actually closer to LCD games from the 90’s.

You press down your finger to move and shoot. The enemies begin to scroll by, beginning with astroids and then morphing into ships that change over time. They shoot more and come in bigger and bigger clusters as time goes on. You can unlock weapon upgrades and shields, but once you’ve been shot enough to deplete your health: Game Over. They don’t even offer a continue.

It does have some pretty nice art, and the variety of enemy design is quite impressive. The problem with the game just comes down to variety of gameplay. While I don’t expect a lot of different types of stages in an arcade shooter, it always feels like you’re repeating the same pattern with just more enemies that shoot faster. The enemies don’t behave much differently, and that doesn’t give the game a lot to go back to. The game could also use some Game Center integration so you can get that old school High Score board.

Buy it?: Space War HD is free, so even if it’s only for a fling, grab the game on the App Store.