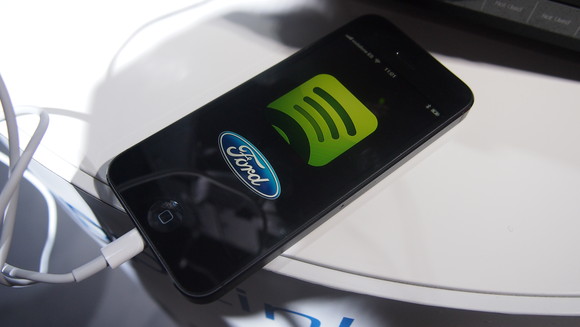 With Siri buttons starting to pop up on steering wheels across America, media companies must find themselves getting anxious about Apple controlling the music on road trips these days. Another company seems to have aspirations of being included in party. Spotify has partnered with Ford to bring streaming music to new Ford cars via Sync AppLink in Europe and North America.

SYNC AppLink opens up a whole new world of content to Ford customers that they can access on the move by voice control while keeping their hands on the wheel and their eyes on the road,” said Paul Mascarenas, Ford chief technical officer and vice president, Research and Innovation. “As one of the World’s most popular music streaming services, Spotify is the perfect partner to demonstrate the benefits of the Ford SYNC AppLink system

SYNC AppLink, will give drivers the ability to control applications from the wheel, and eliminate the need to have smartphone in hand while driving. Drivers are now able to accomplish things like GPS navigation and music shuffling directly from their phones without the need to touch them.

Spotify, with its 20 million active users and catalog of more than 20 million songs, will directly interface with the car giving users the ability to search for songs and queue them up to play hands-free. It’s not the first application to do this: Pandora is also already working with Ford Sync. Additionally, Apple’s own music application works well with the system.

I’m in the market for a new car, but I’m not entirely sure that something like this would tilt the scales towards buying a Ford. The last time I’ve seen SYNC in action (about a year and a half ago), it had a hard time finding the music I was looking for on my iPhone.