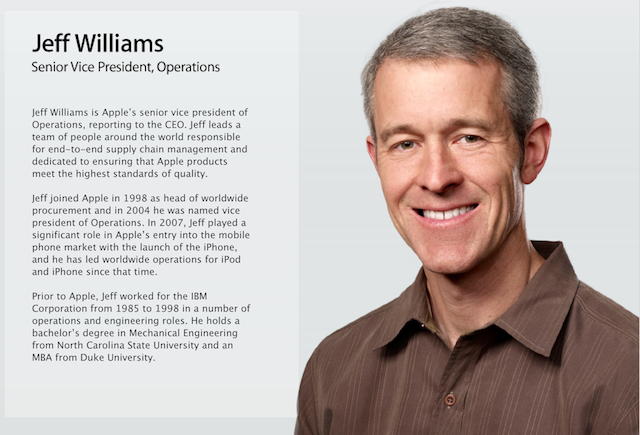 Apple’s Senior VP of Operations, Jeff Williams, is currently in Beijing on a mission to improve relations between the government and Apple, according to a speculative article published earlier today.

Over the past month, Apple and the Chinese government have been squared off since negative press appeared on the state-owned CCTV (China Central Television), and later sponsored “tweets” from Chinese celebrities on Weibo, a Chinese social network. The government has been paying celebrities to say negative things about Apple and has been slamming the company due to “bullying customers” and bad warranty policies. Apple has been apologetic about these practices and has since released an official apology.

Tim Cook has since replied to the allegations and publicly published a letter to the Chinese people. From the sounds of it, government officials don’t seem to be letting up on the company.

“Although Apple has apologized to consumers, we will continue to listen to its words and watch its deeds, and will keep supervision on the company,” a senior official from the Department of Market Regulation under the State Administration for Industry and Commerce said, according to People’s Daily. “The government would take legal actions against Apple for failing to comply with Chinese laws, and punish it for the infringement of consume rights through unfair contract terms.”

Reports out of China have the government angry that Apple is not honoring consumer laws within the country. Apple has been “criticized for providing a lower standard of after-sales service to Chinese consumers, including only offering a one-year warranty instead of two years, as required by Chinese laws.” China’s not the first company to question Apple’s warranty practices. Earlier this year the company was also questioned in Belgium and in Italy where they were fined for practices that weren’t in accordance with local laws.

Williams has been with Apple since 1998 when he joined the company as the Head of Worldwide Procurement. His current responsibilities include maintaining a relationship with Foxconn and working with companies in Apple’s huge supply chain network.