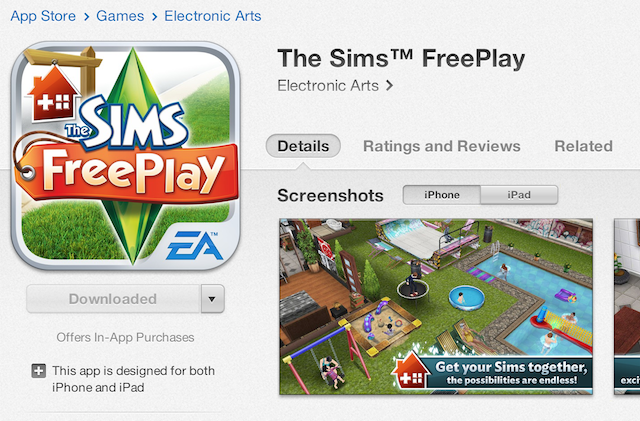 Apple has started to add labels to all freemium apps in the App Store. As of now, these labels are only viewable on the desktop version of the iTunes Store, but they should soon roll out to mobile users in the iOS applications as well. Shoppers can view these labels directly under the purchase button on the app’s information page. The label simply states that the app “Offers In-App Purchases.”

Freemium apps are apps that start out free, but have paid additions like virtual currency and expansion packs. Apps that fall under the freemium category include Real Racing 3, Sims FreePlay and Farmville. The pricing model has proved to be very successful on both smartphone marketplaces like Apple’s App Store and Google Play, as well as web app marketplaces like Facebook’s App Store.

Apple likely added these labels due to a recent lawsuit with parents who have children that charged hundreds, sometimes thousands, of dollars in-app purchases to their iTunes accounts. These children were able to make purchases due to a release of iOS 4 that allowed in-app purchases to be made without the authorization of the account holder’s password. Apple adding these labels gives the company an added layer of security against future lawsuits of a similar nature, but it’s likely not enough. This move has to be a first step towards both educating parents and preventing children from mistakingly purchasing in-app perks.  Ideally, games aimed at a child demographic would be banned from offering in-app purchases.  It’s one thing for teenagers or adults to take advantage of these in-app perks, but another thing entirely for children to unwittingly going on in-app shopping sprees.

You can also disable in-app purchases entirely in your Settings app in iOS.