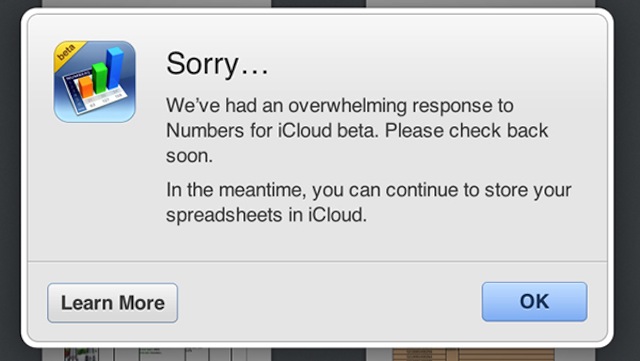 Apple has limited access to iWork for iCloud beta apps for some users. These users, when attempting to access the web apps, are getting an error message that looks like the following:

Sorry…
We’ve had an overwhelming response to Number for iCloud beta. Please check back soon.
In the meantime, you can continue to store your spreadsheets in iCloud.

iWork for iCloud was announced back in June at Apple’s WWDC, or World Wide Developers Conference, in San Francisco, California. The set of web applications allow users to create, edit, and store documents within the iCloud web interface. The web apps sync with the native Mac and iOS Pages, Numbers, and Keynote applications, making for seamless transitions between editing documents on different devices. For instance, if you start an essay on your MacBook using iWork for iCloud at home and want to edit the document on the subway using iWork for iOS on your iPhone, you can do so without a hiccup.

iWork for iCloud web applications are still in beta, so it’s understandable for Apple to halt the use of these apps without notice. The beta opened to a select group of non-developers in mid-July and was just last week opened to the general public. It’s worth noting that, at the time of writing this article, I am not personally experiencing any issues accessing iWork for iCloud beta apps.