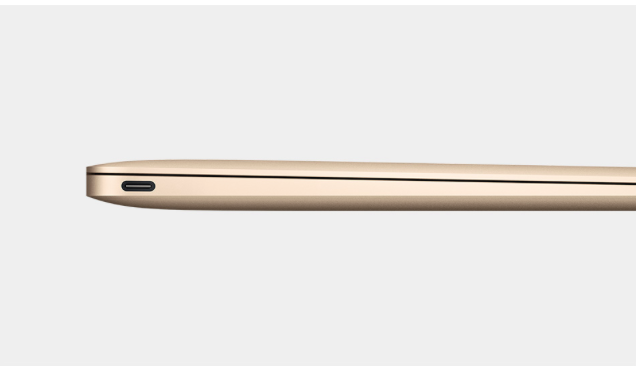 I was betting against it, but it turns out that those rumors of a 12″ Retina MacBook Air were true, though without the Air moniker. The new MacBook is a 12-inch notebook that measures just 13.1 millimeters at its thickest point—that’s about 4 millimeters thinner than the MacBook Air’s thickest point—and weighs a scant two pounds. It comes in Silver, Space Gray, and Gold, just like the iOS line, and it starts at $1299.

The new MacBook has a completely new keyboard with larger key caps and a redesigned switch mechanism that Apple says is more comfortable to type on. In addition, each key now has its own LED backlight.

The display itself measures 2304 pixels by 1440 pixels, and it has a new pixel design that Apple says will allow the screen to be more energy efficient.

The trackpad also received an upgrade and now features Apple’s Taptic Engine feedback system found in the Apple Watch: This new “Force Trackpad” has lead to a whole new array of actions based on how firmly you press the button. You’ll also get haptic feedback through the trackpad. This is one of the most exciting things about the new MacBook, and I hope we get an update for the Magic Trackpad with these features.

In addition, Apple says the new MacBook can get 9 hours of battery life when browsing the Web, and 10 hours when watching videos in iTunes.

The most surprising fact is the USB-C connector is the only port on the device. USB-C is a new, smaller USB connector that can handle standard USB devices as well as carry video-out and power. Jony Ive called the new MacBook the result of “a collective obsession with simplification,” but a single charging/peripheral port might be overdoing it. I think that we’re all going to have to see how this works with external displays.