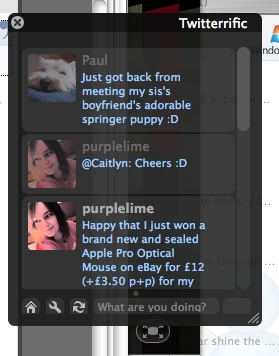 There have been talks for months about Google possibly acquiring Twitter. You have seen it in blogs, social media sites, and even in magazines. At this point, you are probably sick of hearing about these rumors and want something to finally happen. However, quietly lurking in the dark is another contender who might also be interested in Twitter. Apple. It’s currently a rumor, but what if it turns out to be true?

“œAccording to a well-connected Silicon Valley source who spoke with Gawker, and who may have been recruited by Apple for a senior position, Apple and Twitter’s management are engaged in serious negotiations. In fact they may be close to sealing a deal for as much as $700 million, with the intention of announcing the purchase at Apple’s World Wide Developers Conference in June.“

Twitter interfaces with smartphones with ease and is currently on the rise with celebrities starting to use the service. The iPhone, Apple’s smartphone, has several Twitter apps that are very popular with Twitter users. Â Additionally, the rumors indicate that Apple might want to bundle it up with their MobileMe cloud service. In the Fast Company article, they say that another reason for Apple’s increased interest in Twitter is Twitter’s new live search function. Some experts are saying that it will soon rival Google’s search.

However, will Google not fight to acquire Twitter? The interesting part in all this is that the US Federal Trade Commission (FTC) is currently investigating the ties between Apple and Google. You have to wonder if there is something in the works under the surface between the two companies with this shift from Google to Apple working to buy Twitter.

All we can do is see what happens at the Apple’s World Wide Developers Conference in June, and we will know if this rumor is actually true.