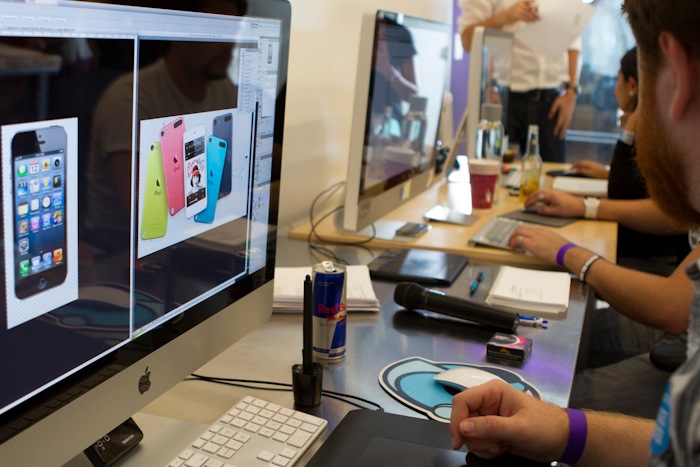 As a Macgasm reader, you’re probably very familiar with the iPhone accessory Mophie. The company was founded by Ben Kaufman and acquired by mStation in 2007. A couple years later, Ben founded Quirky: a company that set out to revolutionize the way we invent.

It seems like a very natural progression which tells an awesome story for Quirky. The Mophie product took a problem, iPhone battery life, and solved it in a simple way. After selling the company, it makes a lot of sense for Kaufman to take that experience of building a single product, and scale it over a few years to what is now 333 products, 188 retail partners and over 400K inventors with ideas that could turn into acquisitions, just like Mophie.

Back in January, I went to New York City to check out the launch of the BlackBerry Z10 (more on that in another post). I reached out to the guys at Quirky because I’ve been following the company and wanted to learn more about them. They invited me on a tour to check out the offices and meet some of the team. So come along with me on an adult field trip of Magic School Bus proportions!

The Quirky offices are in a chic part of Manhattan around the Chelsea district on West Manhattan near the Hudson River. It’s an awesome part of town to have a company like Quirky. There’s some large industrial type buildings that provide the space needed for a company like Quirky, as well as the centralness required to get in touch with local companies and to be present for people to come and browse their physical store.

When you first arrive, you’re greeted by a somewhat mysterious entrance. It sort of reminds you of a Bond film or something as you enter a lobby area with only an elevator door in front of you. When you enter the elevator, there’s a lot of buttons but only one of them takes you to Quirky. It’s like having access to a secret society or something. When you step out the elevator, you immediately get a sense of the massive scale this company is trying to achieve. It’s glass windows allow you to see across the retail store, open conference space, idea rooms, 3D printer workshops and more.

I was greeted at the door and the tour commenced. As we’re walking through the office, you definitely get the sense that this company is about celebrating invention. All around the office there are homages to great inventions by the Quirky community. In a display case along one of the walls in the open workspace shows off Pivot Power, an immensely popular power bar that can curve and pivot around desks and obstacles. On your way through the offices towards the main working area, you come across the Mindfuck room. The Mindfuck room is where the community and Quirky team gather to flush out ideas. It’s called the Mindfuck room because, as you can see from the above picture, ideas can start off pretty obscure and require a lot of charts, graphs, brainstorming and mind mapping to get them to something coherent. Like all the community spaces at Quirky, there are cameras set up so the community, no matter where they are, can participate in the discussion. Teamwork is a big part of Quirky, as you can tell from the Manifesto video.

As you move through the Quirky offices, you can tell the office is designed to mimic the invention process. You start your tour at the general workspace, where employees are busy working away on customer support, gathering ideas, and helping push the cream to the top. We then moved on to some of the rooms that help to flush ideas out. One such room is filled with similar or competing products. The idea here is that if you’re going to make a great spoon, you better make sure you’ve tried every spoon on the market and you know what the market needs. Once a product has been selected at Quirky, it’s time to start prototyping. To do this, Quirky has a huge area with 3D printers, wood working, laser cutters, metal working, paint rooms and more. Even as we walked through the office at 7PM on a Wednesday, employees were busy making prototypes. The rooms are all encased in what seems like sound-proof glass because although the office is filled with industrial machines, the noise level was very minimal and it seemed like a great working environment.

One of the cooler things about working at Quirky must be the enormous 3D printers. There are several, very large 3D printers at Quirky that can be used to build prototypes. There’s a lot of talk these days about how 3D printers are going to change our world, whether it be to make weapons or medical supplies. Walking through Quirky, with all its focus on invention, one can’t help but think that if the 3D printing revolution is going to start somewhere, it’s almost certainly going to happen at Quirky. As any entrepreneur knows, getting a company started and a great product to market is as much about the idea is as it is about the hustle. The startup culture at Quirky is prevalent through the entire office. There are walls dedicated to promoting fast turnaround. The company has a “Better Get Moving” wall that features a digital countdown to the next “Blackout”. A Blackout is the rest time where the Quirky offices temporarily shut down. The idea behind the Blackout is that not only do the best ideas occur when our minds are rested, but employees can only hustle hard if they know that there’s a chance for a break at some point. Burnout can hurt motivation and you need to keep motivation high if you’re going to run a company that churns out product like Quirky. Quirky does everything in-house. There’s even a room at Quirky that specializes in professional photography for products. This room also serves as a Media room where the inventors and hustlers at Quirky can interact and do interviews for any media that might stop by the office. Another cool part about working at Quirky is that the Startup Culture blends nicely with the product culture. The kitchen area at Quirky is not only stacked with tons of beer and great food (they had a HUGE sushi spread when I was there), but they also have their kitchen stacked with great Quirky products. Spilled something on the floor? They’ve got a kick ass dustpan. Need some citrus sprayed on that salad? They’ve got something for that too. When all is said and done, you end the tour at the Quirky retail store that is filled with all the amazing products that have come out of Quirky’s community. It’s a great way to end the tour because after you’ve seen all the hard work that goes into making an amazing product, you end the tour with a sense of accomplishment. The idea is that all this hard work culminates in a real product that is sold in retail stores everywhere. It makes you feel great about the human ability to see a problem, fix it and offer it to everyone else at a reasonable price that benefits everyone. To finish the night, I was invited to check out one of Quirky’s Evaluation Panels. It’s a really fun event that’s broadcasted live. The event consists of a panel, an audience, the online community and a group of ideas. Each idea is brought in front of the panel, consisting of experts from a variety of backgrounds such as tech, retail, design etc.. The panel discusses each of the ideas and votes on them with the community. If the community likes the idea, the panel agrees, and the audience doesn’t have anything particularly negative to say, the idea goes on to the next stage. Once the idea leaves this Pit of Judgement, it goes on to follow the entire tour we took of the office. The idea will go through the employees, designers, more community feedback, the prototype rooms, the photography room and more. It’s all part of an incredible cycle that is meant to churn out the best of the best. And personally, I think it’s all part of one of the coolest companies around today.

So if you’re keen on inventing, check out Quirky. The more people join in the better this community will be and the more we’ll all benefit from amazing products.